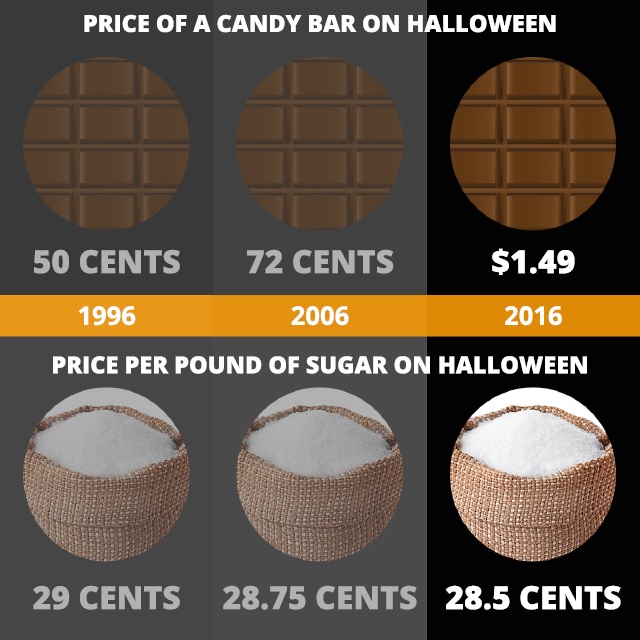 (Chuck Muth) – Swiss watches have nothing on sugar program critics when it comes to timing and reliability.

It’s Halloween. And like clockwork, Big Candy’s minions are crawling out of their chocolate-covered graves to spook everyone with spine-tingling tales of Franken-tariffs and Quota Ghosts.

“As consumers watch trick-or-treaters go by, they likely miss the true terror on All Hallows’ Eve,” Jonathan Sargent intones darkly in an op-ed published last week in the Daily Caller.

“It’s so slight you may not have noticed, but this year those Reese’s Pieces and candy corn are just a bit more expensive thanks to sugar subsidies and crony greed.  In fact for years the price of candy in the U.S. has steadily increased.”

But just like Halloween goblins, there’s more scare than there in Mr. Sargent’s horror story.

While it’s true the cost of “candy” has steadily increased for years, it ain’t because of sugar.  In fact, the cost of sugar today is right around where it was when kids were trick-or-treating at Ronald Reagan’s White House 30 years ago.

Don’t think it’s a coincidence that he picked 2013.  Because that’s the ONLY year in at least the last ten in which the sugar program cost taxpayers so much as a dime.

HOWEVER, that was only because Mexico violated U.S. trade law in 2013 and dumped cheap, government-subsidized sugar into the U.S. market.  As a result, the USDA had to take corrective action to keep the entire North American sweetener market from imploding.

Those trade violations have been addressed.  And now the Congressional Budget Office and USDA project the U.S. sugar program will remain at ZERO cost for taxpayers over the life of the farm bill.

Big Candy is again trying to trick Congress into ending a program that doesn’t cost taxpayers a dime – 2013 excepted – and isn’t the cause of skyrocketing candy prices.  It’d be a real treat if they and their allies would stop trying to scare everybody.

Quick, set your watch!  Only 53 days ‘til the “Big Sugar is Driving Up the Cost of Holiday Candy Canes” op-eds and press releases hit your inbox.