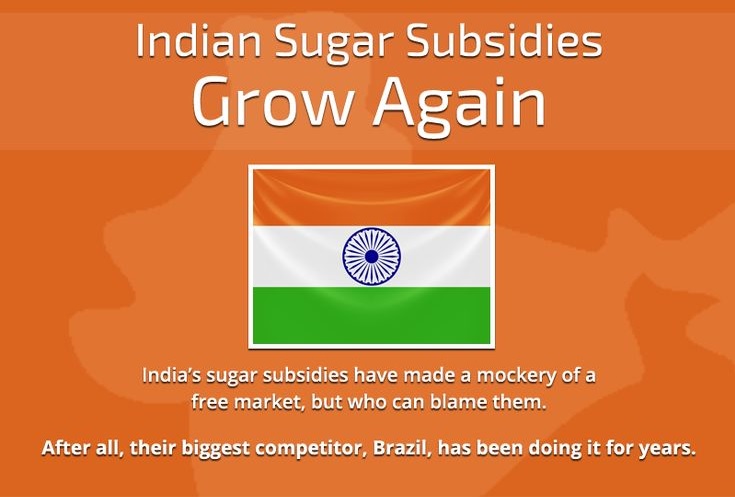 (Chuck Muth, President, Citizen Outreach) – When it comes to trade cheating and the global sugar market, all eyes have been trained recently on how Mexico violated the NAFTA agreement a couple years ago by dumping government-subsidized sugar on the U.S. market.

But let’s not forget India, the world’s #2 sugar producer behind Brazil.

A column this week by Tejinder Narang in Financial Express notes that “Despite deregulation of (the) sugar industry in 2013, the government commands the most dominant force of intervention” in the south Asian nation.

The Indian government, Narang writes, has been “very dynamic” in pursuing protectionist policies for its sugar market “to avoid shocks to the millers and farmers.”

“The import duty is adjusted or waived to fill the supply gap,” Narang explains. “The duty is hiked if there is surplus to prevent cheaper imports. When the supply exceeds demand the government is not averse to subsidising exports to assist millers and farmers irrespective of WTO obligations.”

And according to a Reuter’s report just last week, the Indian government is poised to intervene in and distort the global sugar market once again…

“India, the world’s biggest sugar consumer, is likely to raise import duty on the sweetener to 50 percent from 40 percent in an attempt to restrict cheaper flows of the commodity from overseas, a government official said on Friday.

“Lower imports by India could put pressure on global prices, but will support local prices that have come under pressure in the last few weeks due to expectations of imports.”

This is the global market reality that critics of the current U.S. sugar policy tend to turn a blind eye to.  Yes, on one day the global price of sugar could be less than the cost of domestic American sugar.  But the next day, with the stroke of a pen upon a foreign government decree, that price could skyrocket.

U.S. sugar policy, consisting of some comparatively minor tariffs and import quotas on governments that subsidize their sugar industries, isn’t ideal. But this is not an ideal world.  Until foreign sugar competitors are free of government aid and market distorting manipulations, it’s simply not a free market.