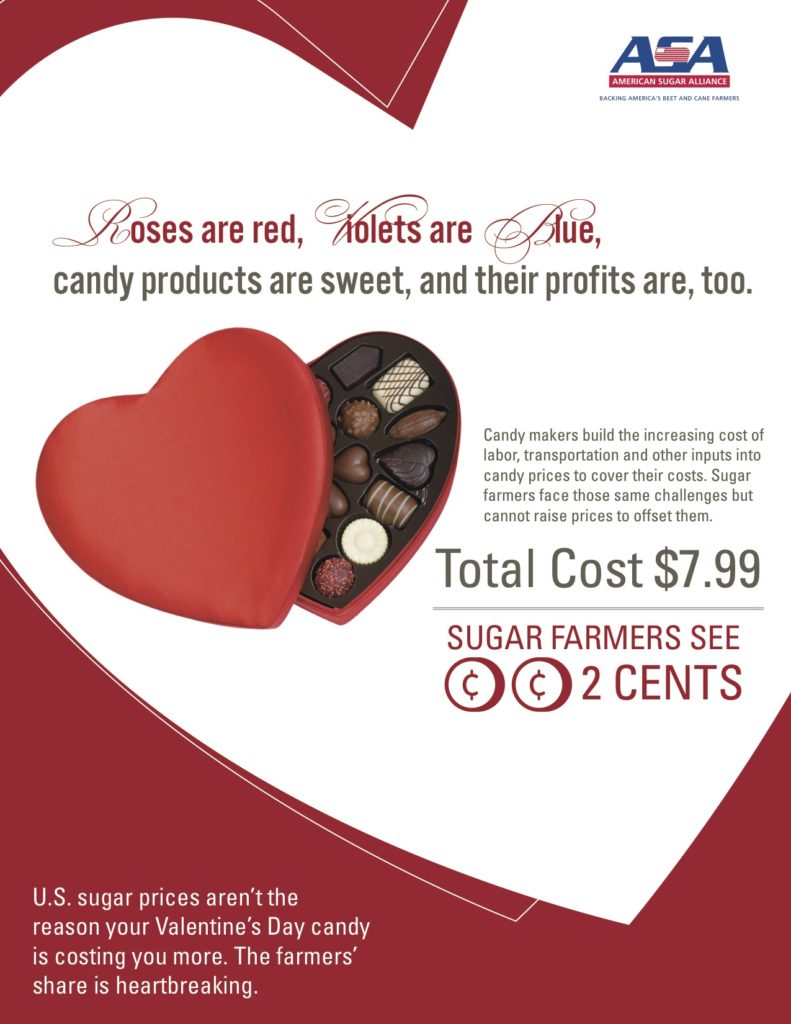 It’s Valentine’s Day.  And you know what means: Big Candy is out in force with PR press releases, op-eds and blog posts attacking the U.S. Sugar Program, including a guest column by Peter Hess, CEO of Corso’s Cookies, which was published on Tuesday at Syracuse.com…

“For decades, food manufacturers and retailers of all kinds have had to pay inflated prices for a major commodity because of an obscure and controversial government handout to sugar growers. This scheme is known as the U.S. Sugar Program – and it’s made Valentine’s Day celebrations across the country a little more expensive since the Great Depression.”

Critics of the U.S. Sugar Program, such as Mr. Hess, are constantly complaining about the allegedly “high price” of domestic sugar as compared to the global price without…

(b)  Admitting that there are no government “handouts” to American sugar farmers, who receive ZERO dollars in government subsidies

(d)  Taking into consideration the additional cost of shipping, since Amazon Prime doesn’t deliver container ships of sugar to U.S. ports for free (yet)

Also, critics fail to acknowledge that the cost of sugar in sweets is miniscule.  As the American Sugar Alliance pointed out this week, sugar farmers in the U.S. get a mere 2 CENTS out of a $7.99 box of Valentine’s Day chocolates.

“Sugar’s share of sweetened products is very low,” explained Ardis Hammock, a sugarcane farmer from Moore Haven, Florida. “If there’s 2 cents worth of sugar in an $8 box of chocolate, it wouldn’t make a difference even if we gave them the sugar for free.”

Mr. Hess went on to voice support for legislation introduced in Congress that would gut the U.S. Sugar Program, which he claims would make the “whole system a little more competitive and fair.”  But it wouldn’t.  Not unless foreign competitors are required to eliminate their actual subsidy programs to assure a true global free market.

To give you an idea of just what we’re talking about here as it relates to foreign competitors, FinancialExpress.com this week published a report on the sugar industry in India – the world’s #2 sugar producer (Brazil is #1).

The very first paragraph notes that India has already doubled its import taxes – “to check cheaper imports from Pakistan” – and its food ministry is planning to abolish it’s 20% tax on sugar exports to reduce its sugar glut while simultaneously flooding the global market with artificially cheap sugar.

Such government manipulations do not a free market make.

The common-sense solution to making the “whole system a little more competitive and fair” would be to adopt Congressman Ted Yoho’s “Zero for Zero” resolution which provides for the elimination of the U.S. Sugar Program, but only in conjunction with foreign competitors eliminating their domestic sugar subsidy programs.